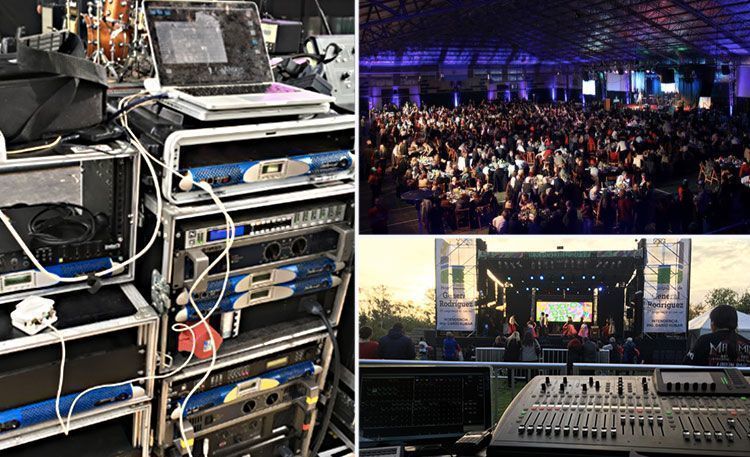 Buenos Aires-based rental staging company made the decision to replace its analogue amplifiers and steps in the digital age with Powersoft K Series. Founded in 2010, G7 Producción is based in Vicente López (Buenos Aires) and ran by Germán and Gerardo Vinante.

While mainly involved in shows, G7 is said to be ready to cater for all types of projects, including social parties, corporate and show business events, providing sound & lighting solutions, systems setup & alignment, live recording and technical advice for venues.  With such an ambitious strategy, the company decided this year to replace its analogue amplification with digital systems, and Powersoft K Series proved to be the best way to make the move. After initially acquiring a Powersfot K3 to test it and witness the power and quality of the Italian amplifier, they decided to invest in some K6s and K8s with DSP.

“We bought a K3 amplifier and after the first test we realized it was time to focus on our growing business using digital amplifiers. Everybody knows that Powersoft is a premium brand, a brand that is known in particular for its power and reliability. Many of our partners already use Powersoft and they praise them all the time, in particular those who are already working with the X Series. Also, the possibility to expand amplifiers is a major advantage for the future”, said German Vinante, G7’s partner and technician.

Powersoft amplifiers are being used with two types of line arrays, Fusión Luma and Fusión Gema models, from Stanich, a local brand manufactured in Argentina, and also with Fusión Solo Floor sublows. “With this new amplification, each system’s performance improved significantly in terms of control, sound and dynamics. It is really impressive how the high dumping factor helps the loudspeakers to work perfectly while controlling any unnecessary over excursion,” he added.

He also highlighted that “the fact that we can control all devices via the Armonía software is another massive advantage”.

“We are very happy about selecting Powersoft. We believe the brand has proved over time that its amplifiers are able to cope with the most demanding settings”, Germán reflected.

Since the acquisition, the Powersoft amplifiers have been used in all the events the company catered for, including a corporate event for La Casa de la Mujer, General Rodríguez 2017 Expo containing different music shows over three days, a parade during La Fiesta de la Flor (The Flower Celebration), and a street party for the Barracas neighborhood anniversary, in Buenos Aires.

“The result has been really good every time thanks to the use of our Powersoft amplifiers. I must highlight the dynamics and headroom they provide to sound systems!”, Germán explained.

The company has also made use of the Armonía Pro Audio Suite software, which allows them to set limiters up and adjust the system in a very precise way. “The Armonía software is really easy to use, so we were able to set delays very quickly and efficiently with the help of a telemeter and check everything with Smaart 7V to make sure the whole system was correctly aligned”, he concluded.