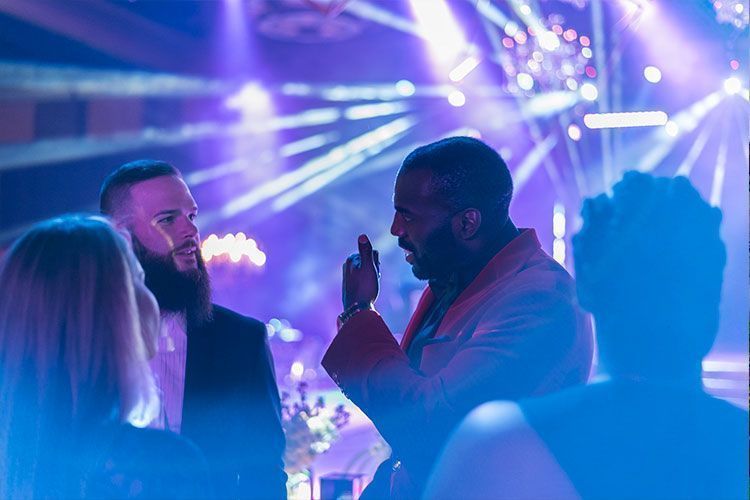 Held to raise funds for those affected by Hurricane Harvey, this year saw a large Elation lighting package light the variety of gala events.

Stage Directions Inc. (StageDirections.com) was responsible for event staging and media production, working for client ZT Wealth and the Altus Foundation. “We worked closely with the client, as well as décor, and helped contribute ideas to the overall event flow,” states Trent Blake, Executive Vice President of Stage Directions Inc. “Our main purpose was to maximize the environmental aspects of the event, what the attendees feel, what they see, and what they hear. We used scenic design elements, lighting, video, lasers, and audio to create the appropriate effects that the client wanted.” The event, which took place at Hilton Americas Hotel on December 9 and attracted 1,500 attendees, had a ‘high-end futuristic’ theme but still required a corporate gala feel, according to Blake.

Lighting needed to work overtime as the event included a fashion show, CEO presentations and awards, a band, DJ, illusionist, after-party and, of course, a seated dinner. Stage Directions Inc. contracted freelance lighting designer Elliot Matson to light the show and, not surprisingly, lighting flexibility was a key component for the LD. “There were several different parts of this event, each of which required a totally different feel,” Matson said. “Each presenter had their own unique lighting and video scene, which pulled away from the standard ‘corporate 101’ look and made the event more immersive. The sheer number of fixtures also allowed us to cover a lot of area in light, allowing us to really draw the audience in.”

Guests entered the event to a 10-minute timecoded show, which Matson says raised the wow factor as soon as they walked through the door. Immediately after that was a fashion show, then presentations, then dinner. “The illusionist performed during dinner and had a lot of specific requirements for lighting so that the illusions were effective and dramatic,” Matson said. “We then went into alternating DJ and band sets for the rest of the night, so the rig also had to be easy to busk for those.” 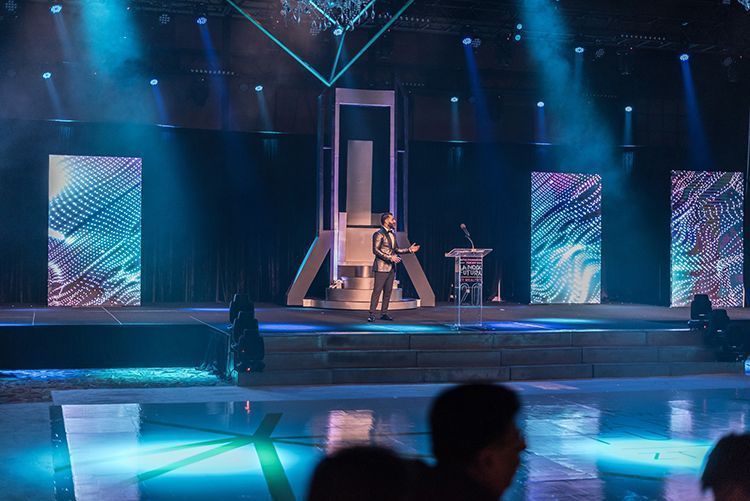 Artiste DaVinci ‘fun to design with’

Mounted on a downstage truss, Elation’s award-winning Artiste DaVinci luminaire was the base of most of the effects in the show. “The number of possible projections allowed me to create very unique scenes for each speaker and allowed me to get the specific looks the illusionist wanted,” Matson says of the CMY and graphics moving head luminaire with 300W LED engine and 7° to 48° zoom. “For the price, I honestly don't know of a close competitor at all. I've seen a side-by-side with a competitor equivalent and the DaVinci was brighter, had better motion, zoom, and dimmer curves, a better zoom range, a (subjectively) better gobo and color selection, and has an animation wheel to top it all off. All this combines to create a fixture that is really versatile and fun to design with.”

The DaVinci's and Platinum Beams were mounted above the stage and used for aerial effects and spotting or washing areas on stage and around the room while the Rayzor Q12's were hung around the room to create a fully immersive experience. The ACL 360 Bars worked from side verticals, which increased the perceived size of the stage and filled in the gaps between the stage and the projection screens. In between the ACL 360 Bars were six lines of Lumina Matrix Panels used for pixelmapping and blinder effects. In the air hung several Lumina Strips and Cuepix WW2 blinders while SixPar 200's (some IP) were used as a supplemental stage wash, as well as backlight, strobe, and blinder.

Remote Device Management
With so many fixtures to contend with as well as the unforeseen issues that always pop up at such events, Matson says one of the biggest issues for him this year was RDM. He comments, “While our Hogs don't support RDM (yet), combined with our DMX King nodes I could readdress and monitor almost every fixture in the rig. We had an issue where Vectorworks had some wrong data, so the fixtures were in a mode that didn't have pixelmapping enabled. This was discovered after they were already flown, and decor had already put things under them, so there was no way to reach them on a lift. With RDM, I was able to correct all of this from the ground.”

Stage Directions Inc. began over 30-years ago and in that time has tried various manufacturers for lighting, audio, staging and projectors/screens, says company head Trent Blake. “But since we began our relationship with Elation, we have never considered exploring other options and have built a high-level of trust with Elation over the years. We continue to be impressed by the quality, speed, attention to detail, customer service, and approachable nature that Elation as a brand encompasses.”

Blake continues, “We have seen many side-by-side comparisons of fixtures and we consistently see Elation products out-performing comparable fixtures from other brands. The price points are reasonable for the quality and performance we get, and Elation representatives actually care about our needs as the user of the products. We never feel like we are being ‘sold’ a new light but are being shown products that might work for us. I trust Elation products on our shows’ stages from weddings and fashion shows to concerts and galas - we are very pleased with the results we get from Elation.”