The Wall Street Journal is much better known for analyzing financial trends than musical styles, but the venerable newspaper pretty much nailed it when it described Lord Huron as having “a decidedly cinematic flair, heavy on mood and evocative imagery.”

Getting swept up in metaphorical open road movie images comes about as naturally as gazing at a big red western sunset when listening to this California quartet’s redolent blend of folk, pop, rock and surf rock sounds. Maybe that’s why their music has been used for theme songs in films by the likes of Netflix, Showtime, HBO, CW and others.

The team at Cour Design is celebrating the emotional pull of Lord Huron’s music on the band’s current USA tour with a powerful, image-rich stage design. Adorned with illuminated representations of mountain ranges as well as cactus plants of different sizes and a large semi-circular backdrop suggestive of a setting sun or moon, the set is clearly representative of the kind of environment that runs through the band’s music.

Designer Erik Anderson chose to illuminate this visual panorama with a collection of CHAUVET Professional Maverick MK3 Wash fixtures. Depending on the venue, between 8 and 11 Maverick MK3 Wash fixtures are flown on downstage truss, while 8 other units are divided evenly between stage left and stage right. The downstage fixtures are used for stage and face light, while those on the sides are relied upon for color effects, lighting the band, accenting scenic elements, and occasional crowd sweeps.

Kai Colucci, who programmed the lightshow, explained how the RGBW wash fixtures enhanced the design. “The Mavericks were the only fixtures in the rig that were used to light the band,” he said. “We had no other key light. Especially important for Lord Huron was making the band pop against the set pieces.”

Changing colors and beam angles from the Maverick fixtures, the design team is able to elicited widely different looks from the stage’s scenic pieces, creating a western desert feeling for one song with deep reds, then cooling things down with whites for another tune, before a giving rise to a more mysterious aura with split colors for a third number. All the while, the smooth, even key lighting keeps the band standing out from the distinctive background scenery.

“By playing with color and intensity from the MKs we’re keeping the flow of looks interesting,” said Colucci. “We’re also having a lot of fun trying different side lighting. Kelsey Gonzales our LD has been doing a great job on the boards”

From his perspective, Colucci describes the show as “the most scenic” he’s ever done, noting that “the music didn’t call for a ton of flashy lights.” Instead, it required “setting scenes,” the kinds of scenes that stick in the minds of audiences for a long, long time, just like those in the movies that Lord Huron has enhanced with their music. 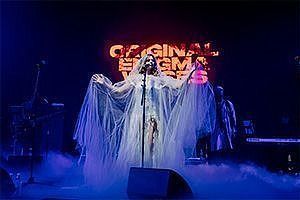 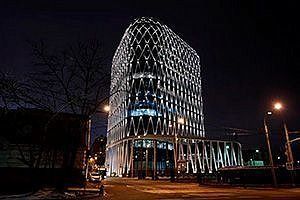