Visitors to 1Rebel might easily think they’ve entered an upscale club were it not for the rows of treadmills, bikes and other exercise equipment that reveal its identity as a fitness center. This is precisely the sort of image, management of the renowned London-based gym hoped to create when they opened their two Saudi Arabian locations.

Their vision for their Middle East expansion was based on the success they had in revolutionizing the UK fitness industry with gyms that offered guests a total  experience that went far beyond toning their bodies to immersing their senses in a compelling club-like experience.

AV designer Toby Jones was responsible for conjuring up this magical mix in London. So, it was only natural that 1Rebel turned to him when opening its two Riyadh locations. Jones worked with lighting designer Durham Marenghi, who he had also collaborated with in the UK. Together they  endowed the new Saudi centers with the engaging look and feel that have become a signature of 1Rebel.

Helping them accomplish this was a collection of CHAUVET Professional fixtures. The team positioned Ovation, COLORado and ÉPIX strip fixtures within the four main concept spaces that define the 1Rebel experience: Reshape, Ride, Rumble, and Reflex

“Our lighting brief from Marenghi was simple: stay consistent with the London venues and take it to the next level,” commented Jones. To execute this vision, lighting and video were employed within each of the gym’s studio/spaces to support the 1Rebel theme with energetic visuals.

In the Ride studio, for example, a total of 41 COLORado 1 Solo wash lights were positioned from the ceiling to illuminate the exercise bikes from above. Thanks to the generous zoom of the fixtures coupled with vivid color rendering, a number of dynamic effects could be achieved within the space to heighten energy levels.

In the Rumble studio, 76 ÉPIX strip IP pixel bars were attached to the steel boxing structure, all pixel mapped using MADRIX software. The long and thin batten shapes of the ÉPIX fixtures functioned as ideal building blocks for the structure, providing the basis for pulsating illumination of the ring with bursts of kick out colour combinations.

In the Reflex (personal training) space, 10 COLORdash Par Quad 18s were hung evenly spaced on the ceiling. From this position, the RGBA fixtures, which are controlled through a ShowCAD touchscreen, easily change the mood in the room by washing it in an array of different colors. The presence of amber in the LED engine ensures that these colors are deeply saturated with no distracting color shadows.

Arnim Friess and CHAUVET Professional build visuals for The Bridge 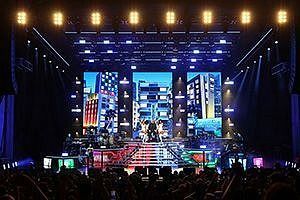 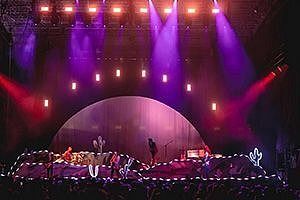