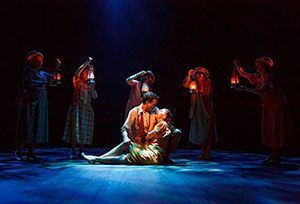 While Hollywood star Steve Martin and singer/songwriter Edie Brickell might seem an unlikely pairing to write a musical, their shared love of bluegrass music resulted in Bright Star, a story of love and loss in North Carolina’s Blue Ridge Mountains. Delicate reproduction of the bluegrass score was vital to the show’s success, which is why sound designer Nevin Steinberg chose an Alcons pro-ribbon sound system.

Bright Star’s world premiere took place at the Old Globe Theatre in San Diego, where the combination of the show’s music and the theatre’s physical attributes lent themselves perfectly to benefitting from Alcons pro-ribbon audio technology. “We were looking to deliver high resolution sound in a comparatively small theatre and I also needed the flexibility of line array,” says Nevin. “I had been introduced to Alcons through trade publications and in conversations with Alcons USA’s David Rahn at trade shows. 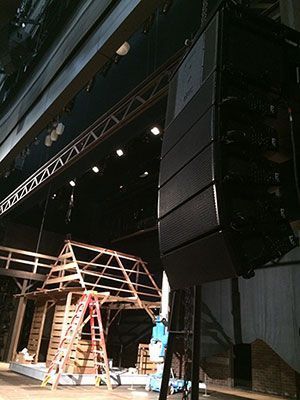 Having previously been able to arrange a couple of demos in other venues and on one of my own workshop projects, I had found Alcons to be one of the only line arrays in current use that sounded good in the nearfield. It didn’t need distance for coherence and fidelity, which was a big advantage for this production.” Nevin specified a system of eight Alcons LR7s micro (single 6.5” + 4” pro-ribbon) line-arrays and two LR7B single 12” line-array subs as a split cluster, flown centrally above the proscenium, plus left-right arrays of five LR14 ultra-compact (double 6.5” + 4” pro-ribbon) line-arrays and an LR14B double 12” sub each on the proscenium itself, with the whole system powered and controlled by three Sentinel 10 4x 2.5kW and 96kHz Amplified Loudspeaker Controllers.

The production’s onstage band were all playing acoustic bluegrass instruments, with further musicians playing cello, viola, mandolin and keyboards offstage. “The score had to be reproduced with a great deal of sensitivity, in the way that most big Broadway musicals don’t. It needed something special and was the perfect opportunity to test my theory about the performance of Alcons systems,” says Nevin. “There was a positive, very real sense from the beginning that we were reproducing the score in an honest and emotionally satisfying way. We wanted people to notice how conscious we were of transferring the music’s soul and emotion, almost like we were honouring the musicians on stage.” Although Nevin was convinced that an Alcons system would be ideal, he acknowledges that it was a leap of faith for the show’s producers and the staff at the host theatre, who hadn’t used the company’s products before.

“There was a great deal of collaboration between all parties and I was thrilled about how supportive Alcons USA was, both in the design process and on site with installation and configuration. David Rahn was on site throughout pre-production to help with any problems and, once we got the system set up, it worked very reliably,” Nevin continues. “It was very gratifying to hear from both the production team and audiences that we achieved the sensitivity and quality of sound that we wanted. I was very happy with my choice of system and the results it produced.” Although the show ran in San Diego for a limited time, reviews were positive and the production team are optimistic that a Broadway run will follow.